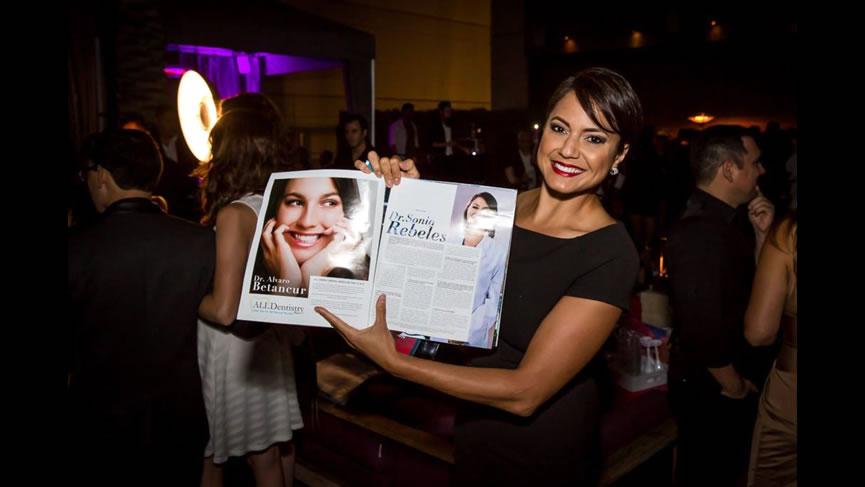 1. Dr. Rebeles you are known for being one of the only Latina doctors that perform minimally invasive benign gynecologic surgery including robot-assisted (daVinci) surgery and single site surgery, how did you become passionate about this type of procedure? Can you tell us a bit more about this kind of procedure?

Latinas are underrepresented as physicians in general and for that reason, yes, I am probably one of few Latina fellowship-trained minimally invasive gynecologic surgeons. Robot-assisted surgery is an upscale form of laparoscopy, or surgery that is performed through small incisions using a thin, lighted camera. The robot enhances the experience of the surgeon by providing a high-definition, 3-dimensional view of the inside of a patient. It also makes the surgeon’s hand movements more precise so that we can carry out very fine dissection on a much smaller scale. I like to refer to it as computer-assisted surgery – the robot is a computer that makes our job as surgeons easier, and hopefully, as a result, the outcomes for patients are better. 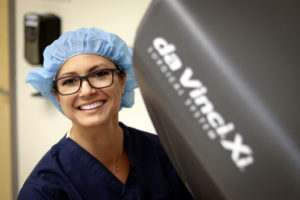 I have always thrived on doing things with my hands ever since I was young. I love the satisfaction of saying I fixed or built something with my own hands, a skill I get from my dad. During my Ob/Gyn residency, I fell in love with surgery, which, when combined with really cool technology in an operating room, made me feel like I was in my own little sanctuary. Plus, the gratification achieved from improving a woman’s quality of life by fixing a problem she had, is an immense reward in and of itself.

2. What are some of the most common conditions that the average woman neglects?

Women are actually pretty compliant when it comes to their annual health maintenance. Rare is the patient who waits more than a couple of years to get her Pap  smear or mammogram. But, I think all too often, many women minimize serious symptoms such as really heavy or painful menstruation. It amazes me how many women are told by their physicians that certain symptoms are normal. Women are tenacious creatures, so, they learn to just deal with the problem, or they get  busy with their lives, often times putting their children or spouse as a priority over themselves. They tend to neglect or cope with symptoms until it becomes difficult to do so any longer.

3. How has your bicultural heritage influenced your career?

My Mexican-American heritage taught me the value of hard work, humility and gratitude. It influenced me the moment I left my hometown of El Paso, Texas, to attend Stanford University at age 18. I went from a city where over 75% of the population was Latino or Hispanic, to a large, intimidating academic institution where people from my heritage were the minority. I instantly felt a sense of responsibility to the people of my culture because I very quickly realized what a privilege it was for someone like me to attend such a prestigious university. When I finished medical school, I returned to El Paso for residency training. I wanted to give back. The people of my hometown border community – my patients – became my teachers. This was undoubtedly one of the greatest and most fulfilling experiences of my career. Being bilingual allowed me to communicate with and understand my patients as a whole and not just a disease process. My command of both languages solidified the essential bond of trust that must be created between doctor and patient.

4. What is the best advice you can give a woman to remain healthy no matter their age?

You are your own best health advocate. So, listen to your body. Women are very in tune with their bodies and know when something is not right. Talk to your doctor and know as much as possible about your own medical history and that of your family. Eat a clean diet free of processed food and cook as many of your own meals as possible. Exercise because it’s fun and something you enjoy doing, and not just a chore. Get plenty of sleep and find healthy ways of dealing with stress.

5. You have received many prestigious awards and have attended some of the best schools in the nation, what advice would you give a latina who is passionate about your field of study?

Becoming a physician takes a lot of discipline and dedication, but always keep your eye on the ultimate goal, no matter how far away it seems, or how badly you want to quit. And even if you do fail a few times or need to reevaluate your path, allow yourself that flexibility, because through that struggle, there will be growth. Remain humble and steadfast in your aspirations. I sincerely believe that if I can do it, anybody can do it, because I am no different and no better than any other woman with a dream.

6. What brings you ALEGRIA?

So much brings me ALEGRIA beause I am able to find beauty in just about everything: a morning sunrise… a desert thunderstorm…photography…staying physically fit…a weekend spent with loved ones…hearing my mother’s laugh…laughing at my father’s corny jokes…a hug from a grateful patient…a successful  surgical outcome…and of course, coffee… coffee definitely brings me ALEGRIA.

We promise to understand that each patient has their own story and individual journey. We will see you as the patient, and not as your illness. We'll believe you and your symptoms, we'll never judge and we'll recognize how vulnerable you may feel. We promise to provide open and honest communication and express gratitude for trusting us with your care. We promise to never stop learning from our patients.
Page load link
Go to Top