It was the day after the Labor Day weekend 2014 when I awoke at 3 AM, bags packed and ready for pickup in an hour by a private chauffeur to el Aeropuerto de Ciudad Juarez, located across the border from my hometown of El Paso, Texas. It was not longer than four years prior when Ciudad Juarez was once known as the murder capital of the world, averaging 8.5 killings per day. For some reason, I was undaunted. I knew I had a job to do.

Dr. German Hernandez, a nephrologist in El Paso, had approached me a month prior, soliciting my surgical expertise. He had been attending medical mission trips in Chiapas, Mexico for the past few years, serving the poor people of the region pro bono at Hospital San Carlos. This nonprofit hospital primarily serves the low-income indigenous population in the region, at a cost affordable to patients, and often accepts barter as a form of payment.

For several months, the nuns who run Hospital San Carlos in the town of Altamirano were seeking a gynecologist to perform much needed surgeries on women such as hysterectomy, ovarian cyst removal, and repair of pelvic prolapse. Pelvic prolapse occurs when defects in the support of the pelvic floor manifest due to childbirth or heavy lifting. Any of a number of different organs prolapse or “fall out” through the vagina, such as the bladder, rectum, small intestine or uterus.

Oftentimes the women of Chiapas were seen traveling long distances carrying heavy loads of leña (firewood) or sacks full of vegetables atop their heads, all whilst also cradling a small infant in their arms. They succumbed to childbirth without obstetric services and delivered their children out in the jungle without assistance, oftentimes in filthy, muddy conditions. Large families with many children were common, often all found living in poverty in one-room shacks. 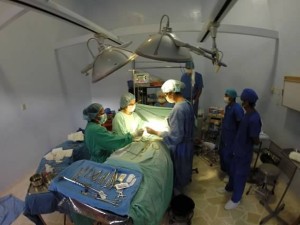 I never imagined the severity of gynecologic pathology, including pelvic prolapse, that I would see. Despite my training, which included experience serving an indigent population on the U.S.-Mexico border, I was unprepared, to say the least, to operate on these women. For one, I was the only surgeon in the entire hospital. These thoughts entered my head numerous times: “Who can I call on if I need help during surgery?” “What if there is a complication?” “What if she bleeds too much?” There was no availability of O-negative, disease-free blood products. Family members, hospital staff, or the doctors themselves would have to donate blood at a moment’s notice.

The second aspect of my feeling of being unprepared was that I had grown accustomed to using the seemingly limitless expanse of technology in the United States: laparoscopy, lasers, robots, hemostatic agents, fancy electrocautery, to name a few. I had to fall back on the old school way of doing things: my two hands, a scalpel, meticulous millimeter-by-millimeter dissection, and sound knowledge of the female anatomy.

Thankfully, the women I operated on all had successful outcomes. When we rounded on these women at the hospital the days following their surgery, they looked at me with their deep, penetrating eyes and wrinkled faces and reached out with their worn, leathered hands in gratitude. They spoke to me in their indigenous Tzeltal languages, which had to be translated into Spanish for me. “Thank you.” “I will pray for you.” “God bless you,” they said.

I was blessed, multiple times, throughout that trip to Chiapas, and the blessings have been ongoing. I came back to the U.S. recharged and with a renewed sense of purpose not just in my career, but also in my life. “You see the face of God in these patients,” German had told me before my trip. He was absolutely right.

We promise to understand that each patient has their own story and individual journey. We will see you as the patient, and not as your illness. We'll believe you and your symptoms, we'll never judge and we'll recognize how vulnerable you may feel. We promise to provide open and honest communication and express gratitude for trusting us with your care. We promise to never stop learning from our patients.
Page load link
Go to Top